In the area of Schwarzenburg, which rises southward of the Bern towards Gentrishketeu, a rural tricolor dog could have been met since ancient times. At the end of the last and at the beginning of this century, this old rural breed was mentioned for the first time on one official meeting of breeders. No one suspected then that the breed will, by its appearance and character, gain thousands of friends of dogs worldwide.

The first thing that is seen on this long-haired dog is his tricolor. Dark black overcoat decorated with red signs above the eyes, on the cheeks and feet, whiteness on the chest, on the tops of feet and on the tip of tail and white blaze, make this dog striking and noticeable.

Age and the exact origin of the breed is difficult to determine, but it is known that these dogs were used in the time of the old Rome as fighting dogs who went in front of the Roman legions and brought confusion in enemy ranks. During the time, by long-term and rigorous selection, the aggressive character of these dogs disappeared, and they have become very balanced and stable dogs. Aggressive dogs have been castrated or killed.

Farmers from surrounding villages of canton of Bern have used these dogs for towing for years, and they have also been used as guardians of herds and houses. For the first time, in 1902, at dog exhibition in Ostermundigen, three dogs were represented, and at the international exhibition in Bern, in 1904, six males and one female appeared. Because of the achieved results, four dogs were written in a regular book SHSB, and the breed is named after the place Dürrbach, near Riggisberg in the Canton Bern.

Burgdorf breeders showed their dogs in 1907 for the first time at dog exhibition in Lucerne and in the same year, in November, they founded the Swiss „Dürrbächler” club in Burgdorf. However, in the following 1908, the club changed its name into "The club of Berner mountain dogs". 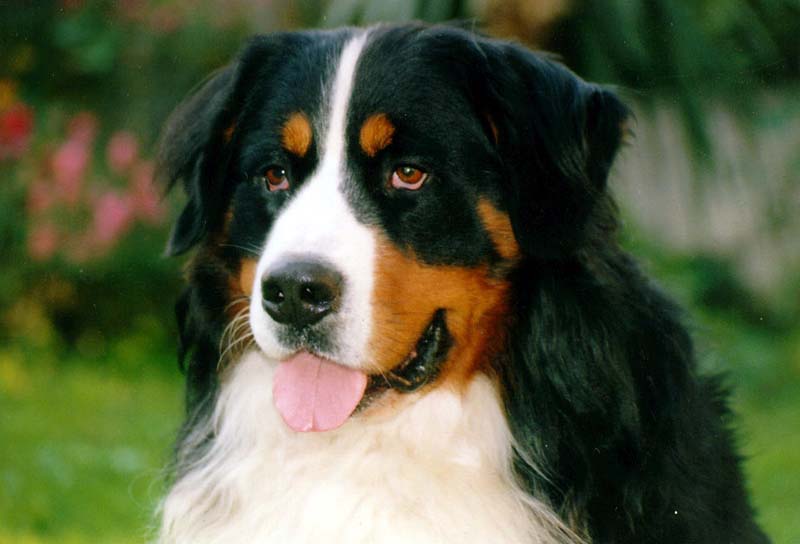 Great connoisseur and lover of the breed, Professor Dr. Heim, suggested that this dog should be in the future called "Berner village dog". But in was only in 1913 that the name of the breed was officially changed in "Berner mountain dog", though it has still remained „Dürrbächler” among the population of Bern.

People had been working for years to improve the race. The very structure and constitution of the dog remained unchanged but the standard was changed so many times in terms of the position of colors on this dog.

Berner mountain dog has always been strong, highly maneuverable, industrious and useful, although below the strong and robust constitution, a gentle and sensitive being, good character have been hiding, which is why the breed has become very attractive and popular. Berner mountain dog tracks everything that happens in his surroundings, carefully watches all family members, especially children. Binding and forcing to spend most of the time in the closed box can, in a negative way, affect his behavior. In such cases, the dog may become very ill.

Berner dogs seek for very close contact from their masters, and from all members of the family. Only then their intelligence and ability to work are fully expressed. These dogs are more often used in official purposes, because they are excellent seekers. They are also used as rescuers of victims from the ruins and avalanches, and especially as guides of blind people.

As for food, while they are in a phase of growth, as well as all the dogs that belong to large breeds, they must receive meals with lots of vitamins and minerals. Later, when they grow up, they are satisfied with modest amounts of food. They are not picky in terms of nutrition and it is easy to nourish and breed them, they have a dense undercoat and can easily bear even the strongest winter. They love snow, and therefore they are often seen as towing dogs that drag their sledges. However, the summer heat, which is quite expressed in recent years, can harm him very much, so in these days Berner dogs must be placed in deep shade. The best shelters from hot summer days are shaded basements, paved corridors, and the thick foliage of trees and ornamental shrubs.

It is interesting that these dogs accept other animals in their society as well, on the condition that all of them are of same household. They are very distrustful towards foreigners until they are sure of their intentions. In the evaluation, this breed is infallible.
Happy, and very emotional, if necessary fierce but calm, cautious and indulgent towards weaker ones, Berner mountain dog is slowly but surely becoming one of the most desirable family dogs. 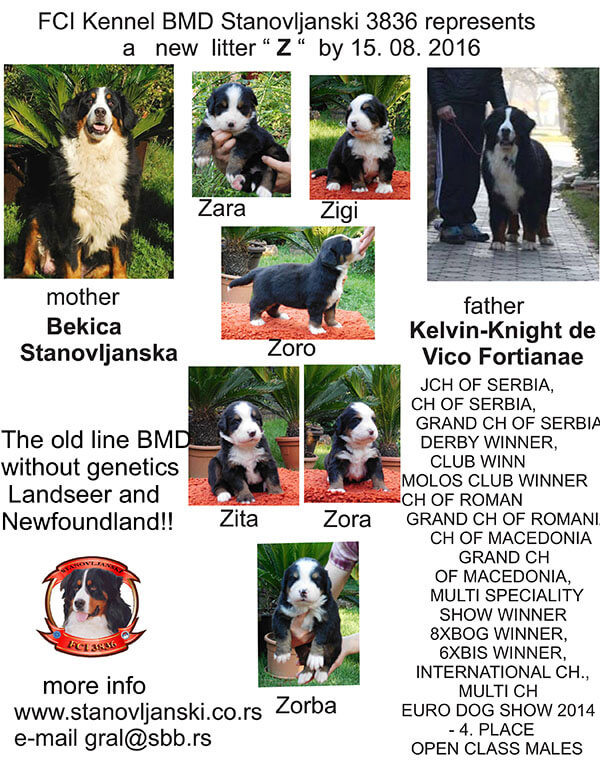